INTERNATIONAL SYMPOSIUM ON VIOLENCE IN SCHOOLS

INTERNATIONAL SYMPOSIUM ON VIOLENCE IN SCHOOLS

The Government of Cameroon advocates for a school milieu free of violence and conducive for the development of the best human capital. 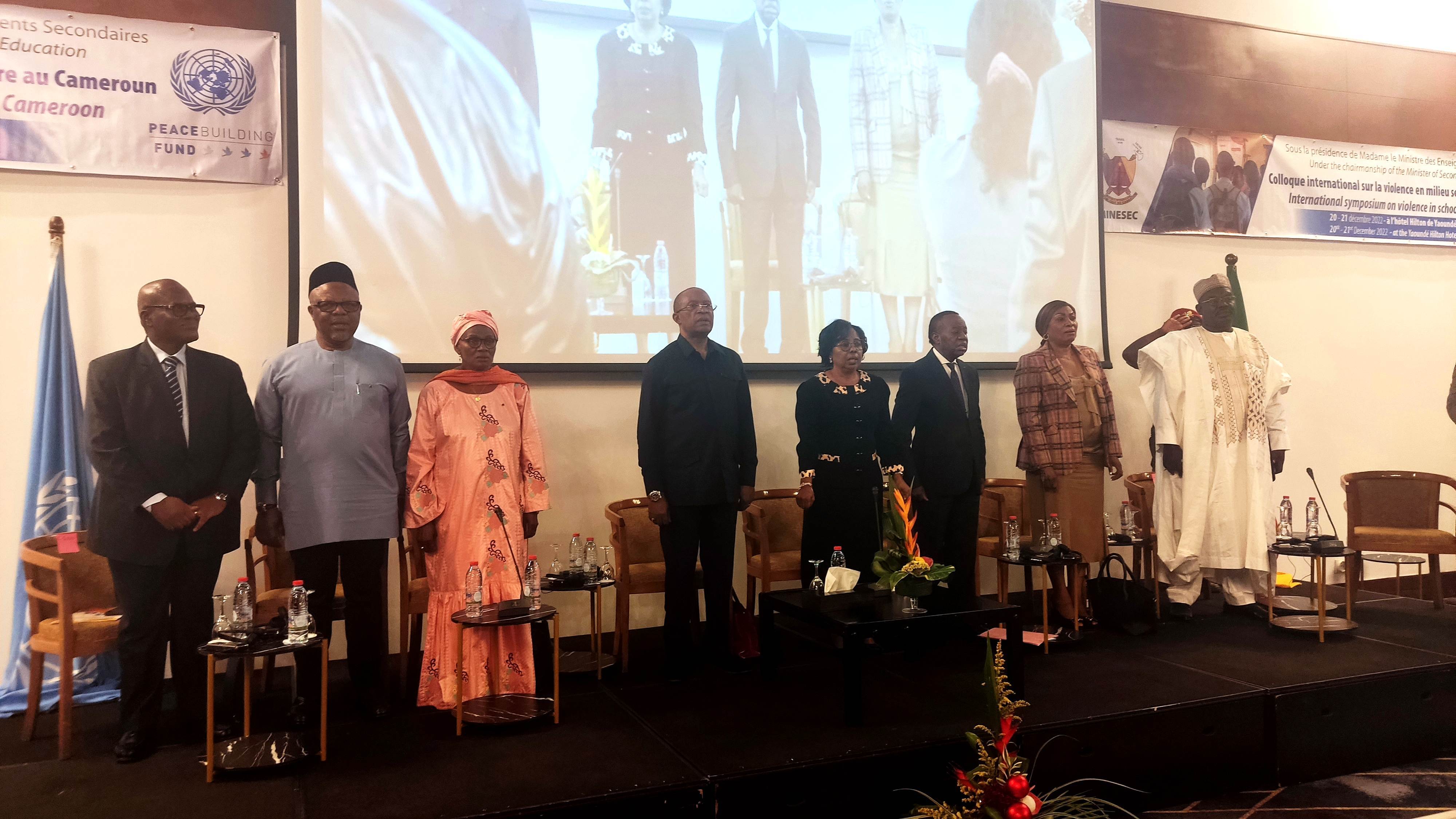 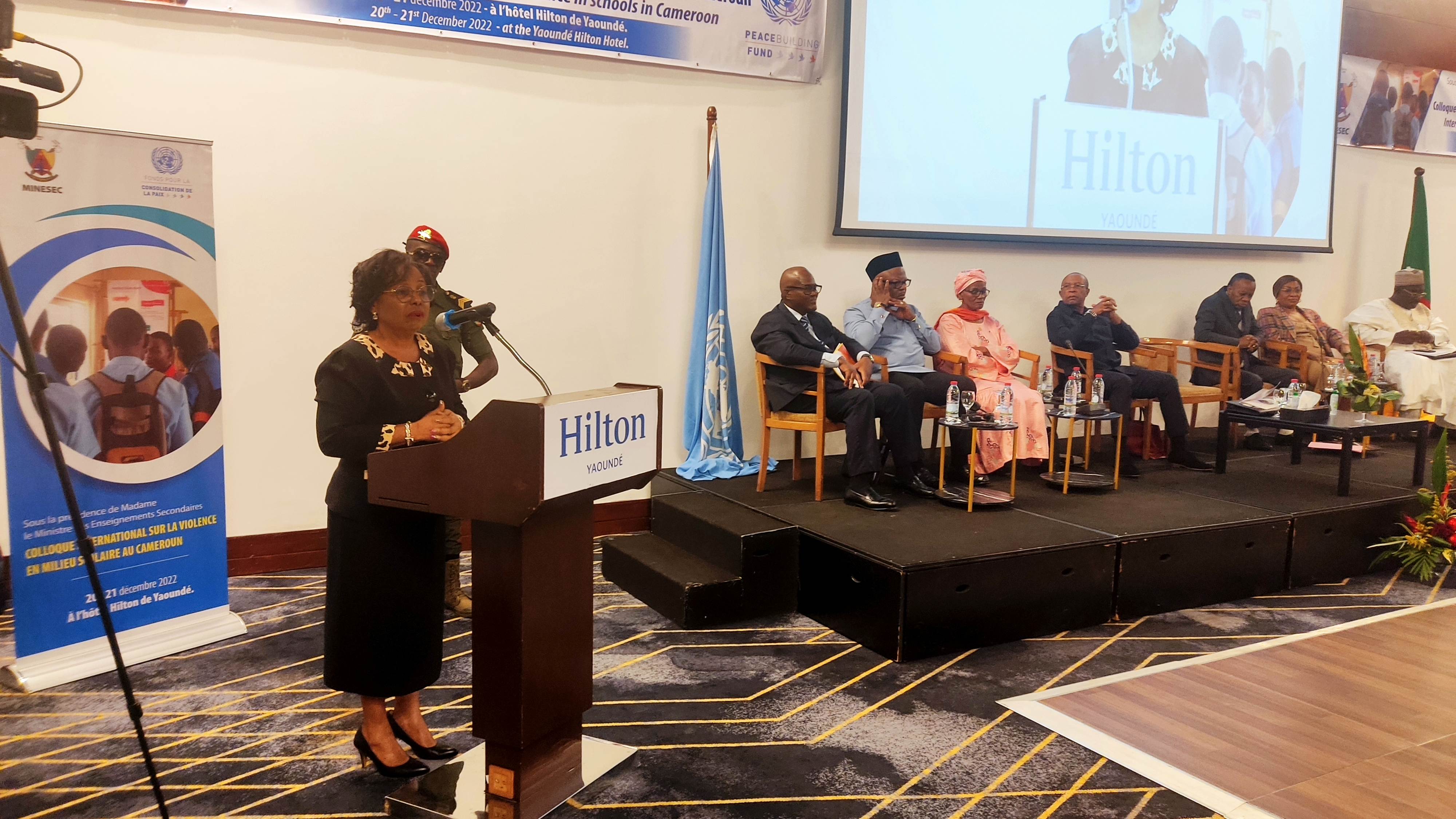 This is the paramount statement Prof Nalova Lyonga, Minister of Secondary Education, made during the international symposium on violence in schools in Cameroon, held in Yaounde from 20th to 21st December 2022.

Initiated by the Minister of Secondary Education in accordance with the instructions from the Prime Minister, Head of Government, Chief Dr Joseph Dion Ngute, the international symposium on violence in schools aimed at identifying the aspects, forms and causes of violence in the school milieu in Cameroon with a view to draft appropriate recommendations as to how to address this thorny issue.

The initiative which enjoyed the collaboration of the United Nations system in Cameroon brought together over 150 participants including, policy-makers, scholars, teachers, parents, students, security officials, members of civil society organizations and development partners. Through presentations and panel discussions, the stakeholders lauded the Minister’s actions towards reversing the trend of school violence, and then tabled their contributions, all of which provided a comprehensive understanding of the phenomenon. 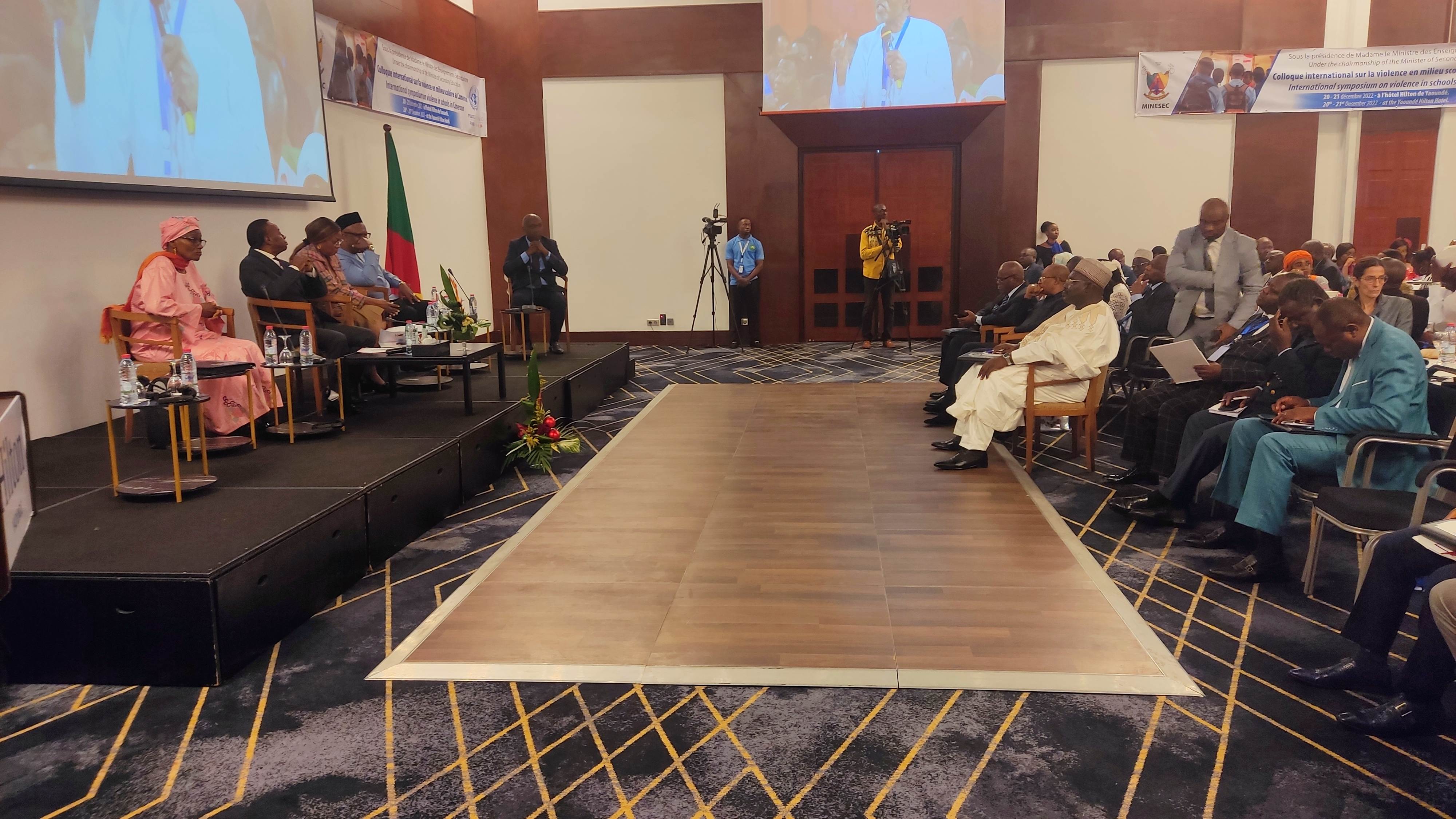 Beginning with the high level panel which saw the participation of Prof Jacques Fame Ndongo, Minister of State, Minister of Higher Education, Prof Marie-Thérèse Abena Ondoa, Minister of Women Empowerment and the Family, Pauline Irene Nguene, Minister of Social Affairs and Paul Tasong, Minister Delegate in the Ministry of the Economy, Planning and Regional Development, these Government officials strongly condemned violence in general and more specifically in the school milieu which they acknowledged as a sanctuary for the holistic development of the Cameroonian youth. 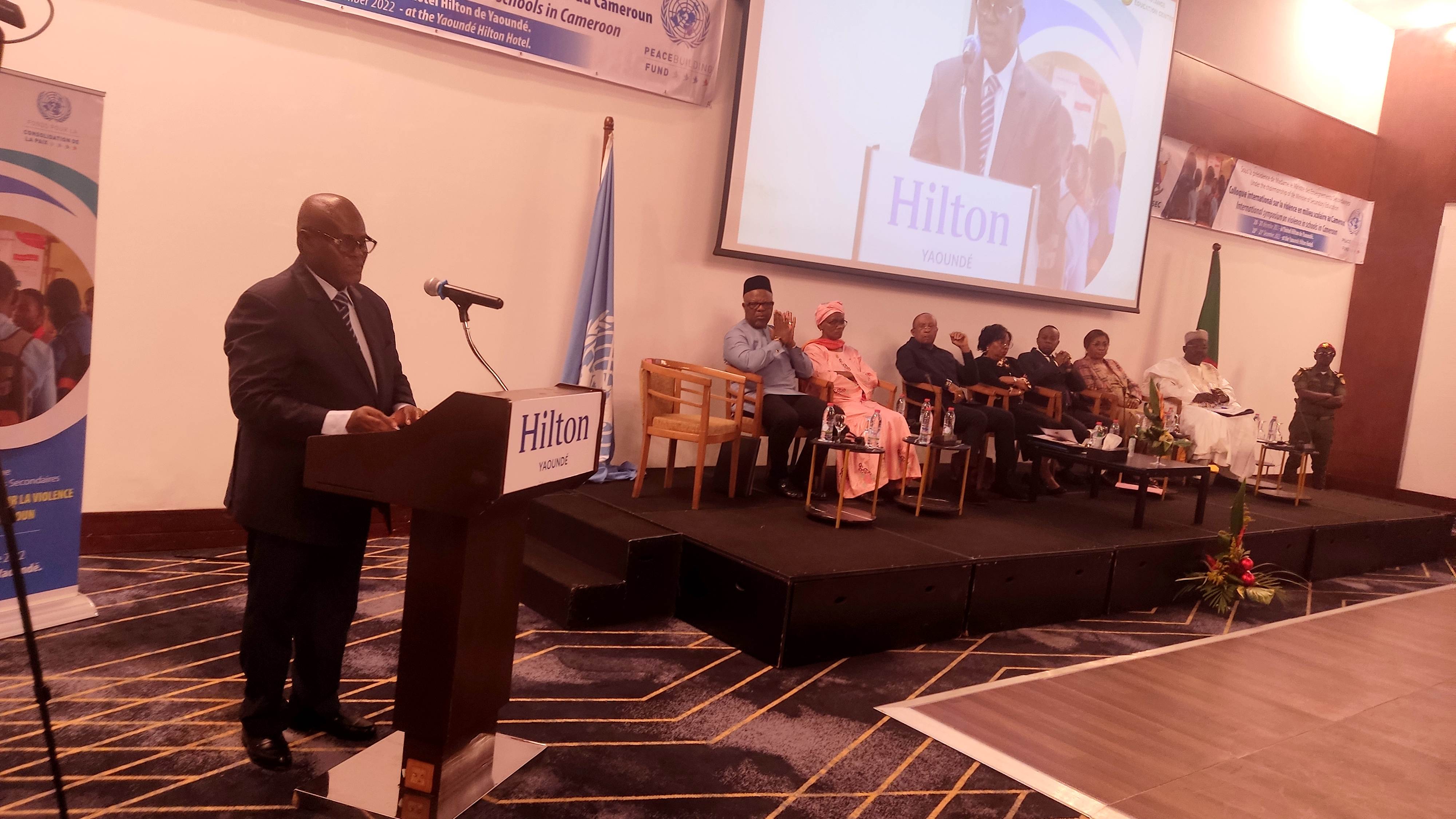 In the same light, the acting Resident Coordinator of the United Nations System in Cameroon, Dr Justin Koffi, underscored that “school violence spares no stakeholders, deprives children of their right to education and risks derailing the path of the Nation towards sustainable development.”

The school violence vulnerability and risk mapping presented by Bernadette Mbia Nsansi, Director of Guidance-counselling, School Life and Assistance in the Ministry of Secondary Education (MINESEC), confirmed this reality whereby boys (64%), girls (3%), school officials (1%) and people around the school environment (34%) are involved in school violence in Cameroon. She further indicated that 11 cases of aggravated violence were reported in secondary schools from 22 November 2018 to 13 April 2022, the most regretful one being the stabbing to death of a young Mathematics teacher by one of his students at Government High School Nkolbisson, on 14 January 2020. 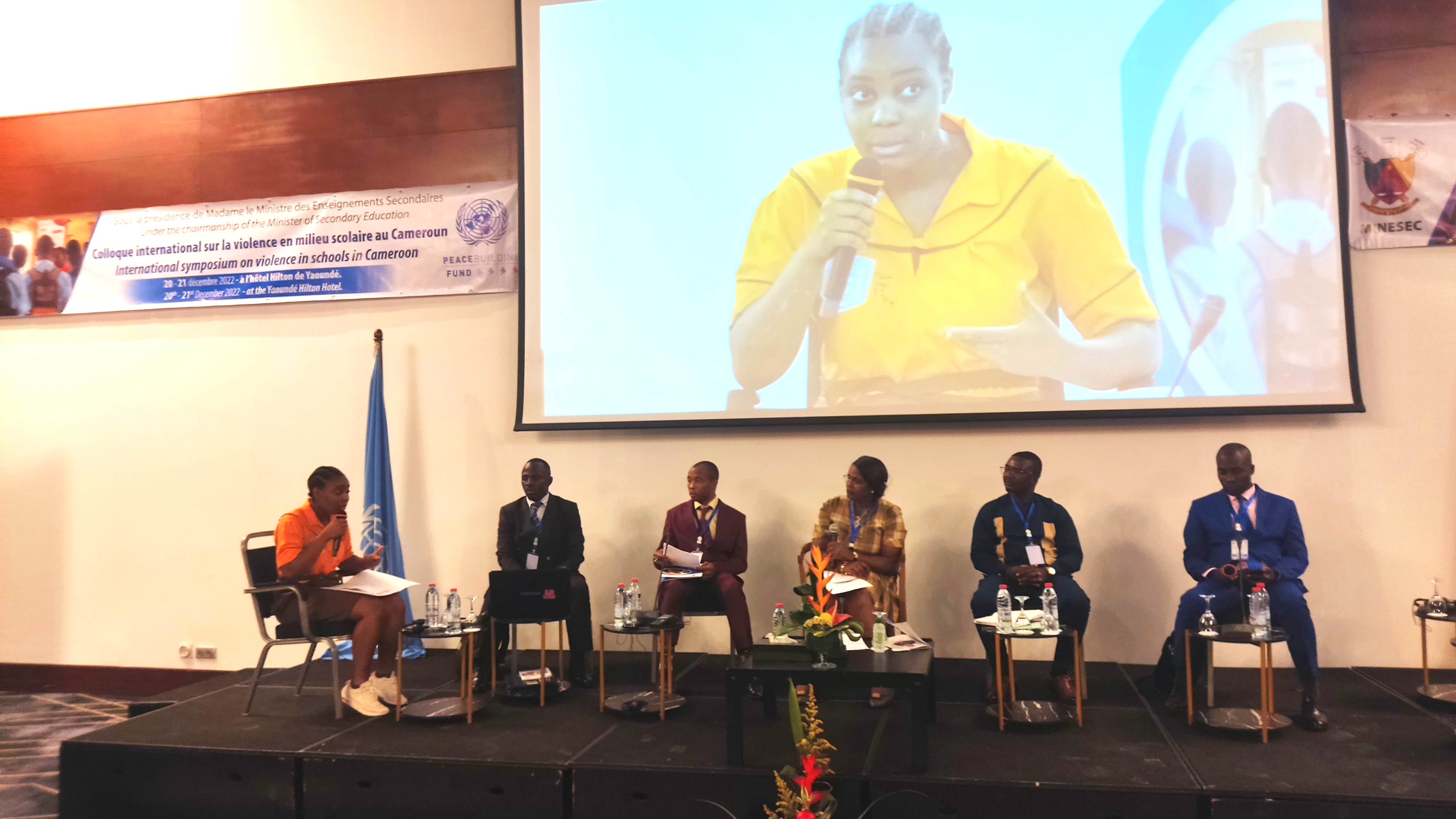 Taken altogether, the inputs from the contributors culminated in 21 recommendations of which 12 are to be applied directly within schools and 9 destined for the actors around the school environment. These include amongst others: promoting dialogue between the various members of the Education Community, education on peace, providing adequate psychosocial assistance to students in need, reinforcing collaboration between MINESEC and the specialised services of the Ministry of Women Empowerment and the Family, and the Ministry of Social Affairs. 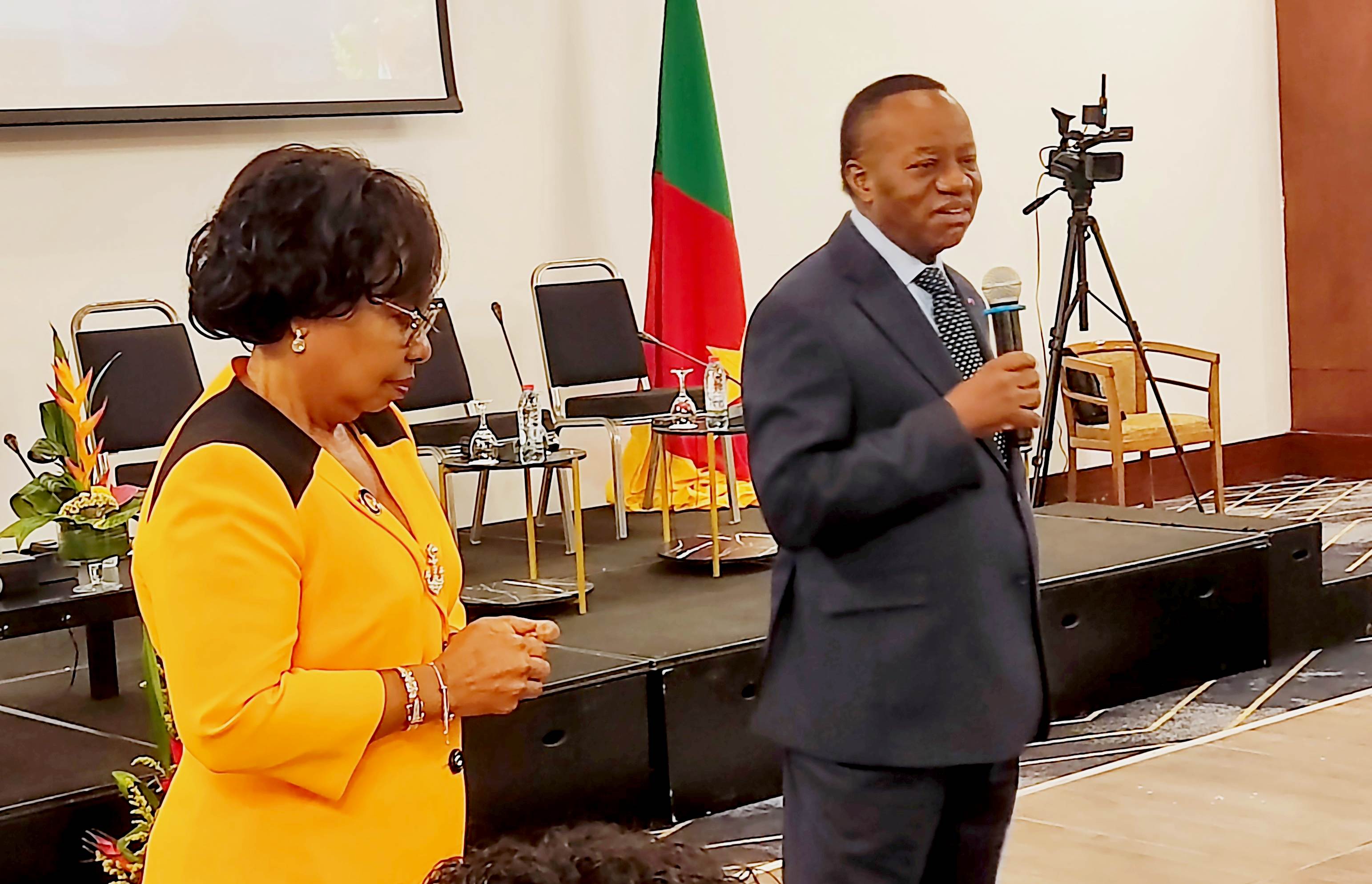 In his concluding remarks at the end of the symposium on 21st December 2022, Prof Jacques Fame Ndongo, Minister of State, Minister of Higher Education, commended Prof Nalova Lyonga, Minister of Secondary Education, for the successful organisation of this international symposium on violence in the school milieu in Cameroon. He saluted the recommendations formulated and committed all the parties concerned within and outside the school environment to take immediate and concrete actions in line with these resolutions so as to preserve the sanctity and purity of Education in Cameroon. 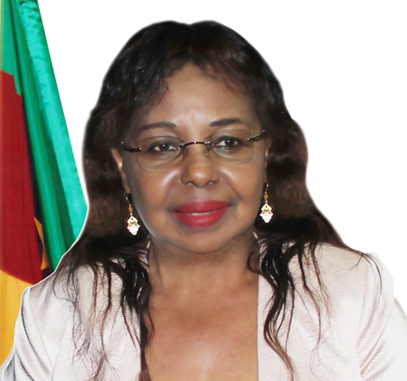